Posted in Flashlights by Shane McGlaun on June 9th, 2010

About this time last year, I talked about the Joby Gorillatorch. The Gorillatorch is a plain flashlight that is on one of the articulating Joby tripods with magnetic feet. The Gorilltorch was a very cool little gadget.

Eco gadgets that don’t require batteries usually have a solar panel in them. Or maybe they require you to crank a handle to juice it up. Well, the BunBun Eco Light has neither. Instead, you just have to twirl it around for about 30 seconds.

All of that kinetic energy will juice the battery and give you 5 minutes of light using a trio of LEDs. You would probably be twirling something anyway, like your keys. The BunBun Eco Light should arrive this month for around $22 in pink, green, purple and black colors. 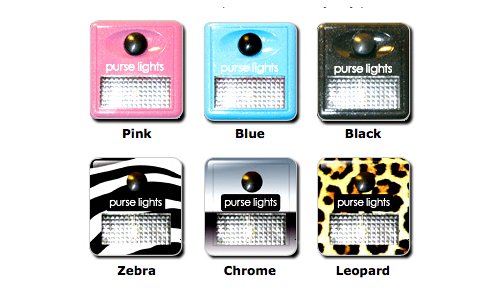 Seems like whenever gadget makers offer women new products, it either involves make-up, the color pink or something for their purse. Well, this one covers all of those bases. Purse Lights are powerful LED lights that can help you find your pink gadgets hidden at the bottom of your purse…In the dark.

Just press the button and you’ll be able to find whatever you are looking for. Seems we’ve heard of this before, when it was called a flashlight. Of course it comes in stylish designs such as zebra, leopard, chrome, and black. And yeah, pink too. 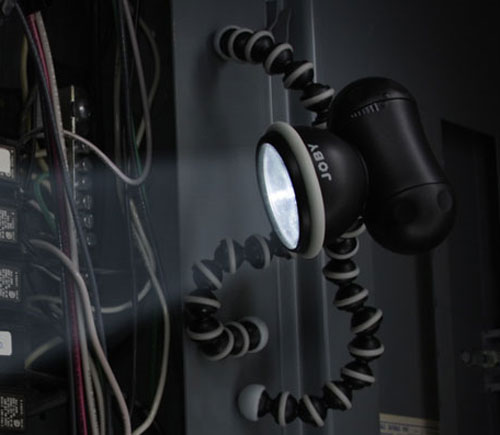 Joby makes all sorts of tripod style articulating devices that serve many uses. The devices can be had for holding cameras, webcams, mobile phones and now the company has introduced a cool flashlight.

The new device is called the Joby Gorillatorch and the tripod mount has magnetic feet to allow the flashlight to be stuck to any metal surface for hands free use. The flashlight uses LEDs and has 65 lumens of light.

5.11 Tactical has finally released their brand new flashlight known as Light for Life. It comes with three LEDs for backup, but its main selling point is the Flashpoint Power technology, which is basically an ultracapacitor energy storage system.

What this means to you is that it requires just 90 seconds to charge fully, then it will shine at 90 lumens brightness for up to 1.5 hours per charge. Impressive huh? You can choose from bright (270 peak lumens), standard (90 lumens), and strobe modes, depending on the circumstance. The LEDs have a 50,000 hour lifespan and were specially designed never to be replaced, while the flashlight itself was engineered to “offer 10 years of maintenance-free service under typical conditions.”

END_OF_DOCUMENT_TOKEN_TO_BE_REPLACED
Permalink | Comments (1) |
Posted in Flashlights by Conner Flynn on May 26th, 2009

Our favorite batteries are back. We’ve missed them. What other batteries are powered by your pee? Only Nopopo. As far as we know. We’ve missed you Nopopo. Our urine feels wasted without ye. But no more. This compact LED lantern will be equipped with a NoPoPo battery that doesn’t require a power outlet to juice up. It’s powered by water. Failing that, it will gladly accept your urine and give you power.

Sadly, the NoPoPo battery has been rated at just 500mAh and has a recharge capability of just four times, making this Wiz-powered lantern only good for emergency use.

END_OF_DOCUMENT_TOKEN_TO_BE_REPLACED
Permalink | Comments (1) |
Posted in Flashlights by Conner Flynn on May 23rd, 2009

Don’t worry about dropping it. It can handle 15-foot falls without a problem, and while they were at it they made it waterproof. It uses LEDs of course and can even be powered by a single AA battery. Included are blue, red and green LEDs so you can see various things in the dark. 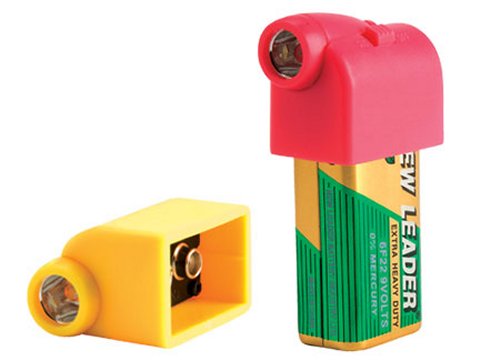 Battery Snaps are an interesting little gadget that turns a regular 9volt battery into a single-LED flashlight, by snapping onto the top. Just snap it on and use the button on top to turn on the LED light. Instant flashlight.

When the LED light stops working, that’s when it’s time to replace the battery. For $5, it comes with a 9 volt battery included. It isn’t going to light up a whole room or anything, but these would be handy to have for power outages. 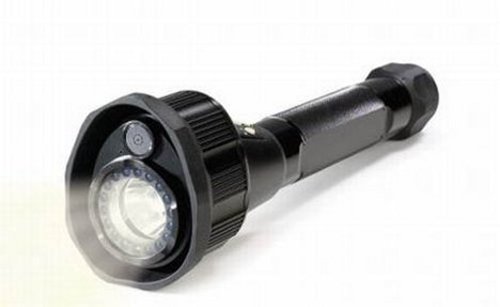 If you are adventuring in the night and want to catch all your findings on video, this is the flashlight for you. You only have two hands. Why hold a video camera in one hand and a flashlight in the other? You’re sure to drop one when you see Bigfoot or the Chupracabra anyway, and there goes your proof.

The Infrared Video Recording Flashlight comes with 17 infrared LEDs to illuminate what’s ahead of you. The built-in camera will capture everything in 640 x 480 resolution at 30 fps, with 128MB of internal memory and a microSD memory card slot. 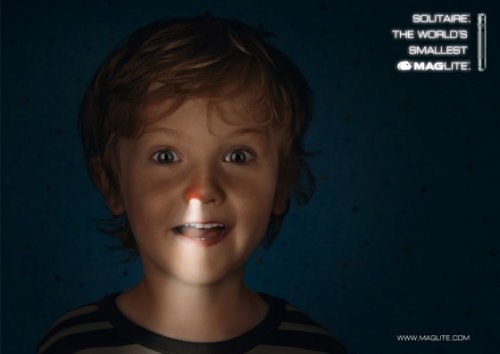 Kids love to stick stuff in their noses. (They also like to dig deep and pick stuff out, but that’s another story.) The little tykes will stick toys up their nostrils, candy, their finger, you name it. In fact, if there’s nothing nearby to actually stick up their nose, they often go into withdrawal, constantly sniffing and touching their nose while snorting, like a junkie checking themselves for powder on the outside.

Well, Mag-Lite is exploiting the phenomena in their latest ad campaign. Making “light” of it even. Maglite is launching their smallest flashlight yet named Solitaire, with these images of kids who breath light out of their nostrils. 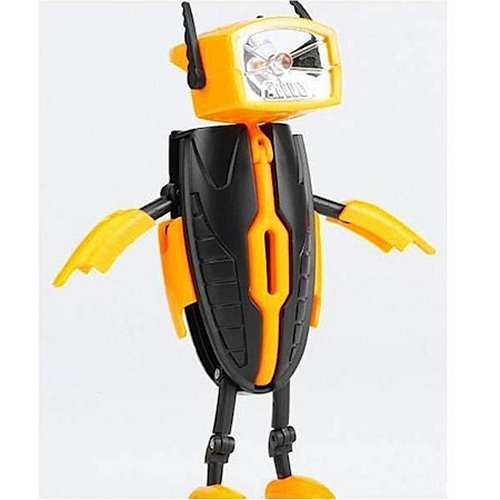 Worried about the rise of the robots? Sure we all are. But we never saw it coming from our trusty flashlights. Yes, they will transform and enslave us by being useful in the dark. Which is a brilliant plan. We will never see it coming when the light goes out and they finally attack.

This awesome flashlight can transform into three different forms: humanoid robot, scrambling spider and standing spider. That’s three cool things in one flashlight. Which is two more than your current flashlight does. All this coolness for only $20.

Chances are you’ve reached for your flashlight in an emergency, only to find that the batteries have died. LED flashlights aren’t much better, as they take hours to get a full charge. The Light For Life UC3.400 flashlight from 5.11 Tactical could end all of your flashlight woes for good. It doesn’t use batteries, instead it uses an ultracapacitor to hold it’s charge, which gives you about 90 minutes of light per charge. It produces 270 peak lumens in bright mode, 90 lumens in standard mode, and has a 270-lumen tactical strobe.

That’s pretty impressive, but it gets better. The ultracapacitor will go from dead to fully charged in just 90 seconds. Yes 90 seconds. For at least 50,000 times. Assuming you used a full charge every day, it’s good for 135 years. You’ll never need another flashlight. Ever. 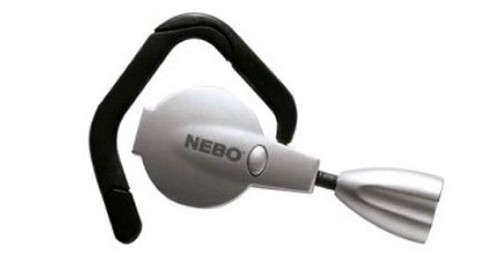 This convenient little gadget from Nebo hooks on your ear and looks similar to many Bluetooth headsets but is actually a LED flashlight that lets you keep your hands free and have a light wherever your head’s pointing.

The LED light is adjustable, fits on either ear and has two modes; one is a bright white light and the other is green allowing you to illuminate something in the dark but not loose so much of your night vision. It runs off of a lithium battery and the LEDs are said to last over 100,000 hours without getting hot (over 11 years of continuous light). It retails for about $16 with shipping. 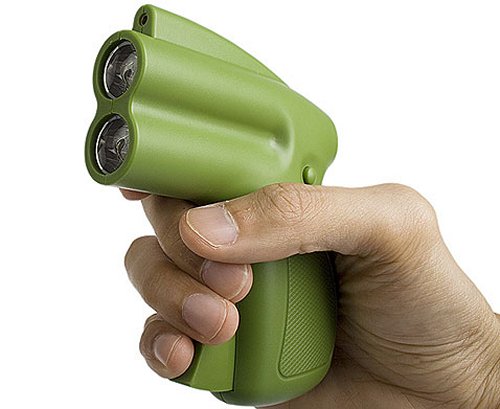 Aim, squeeze the trigger and see what you’re looking at. That’s the concept behind Brando’s Hand Pressing Gun Flashlight, an illuminator that comes with a red laser sighter. Aim that red dot at where you want to illuminate your beam of light and then when you squeeze the flashlight’s trigger two white LEDs wink on. The flashlight doesn’t require batteries since it uses the kinetic energy from your hand squeezing the trigger to power up the LEDs.

The official website doesn’t say too much about how many squeezes you need to give the light to work but it’s probably more than a couple. If you’re in a situation where you need steady light for a long period of time I wouldn’t recommend this flashlight for the job but for something …

This little gem is a perfect example of why the world of gadgetry is so great. The idea is so simple and has been sitting underneath our noses for years but it’s only now that someone has developed it. Take a look at the first flashlight that doesn’t require a flashlight, only a battery and the LED light.

The three LED lights snap on the top of any 9-volt battery and instantly transform it into a working mini-flashlight. There is even a power switch on it so you can conserve the charge remaining on the battery and leave the light still connected to it. The 9-Volt flashlights will be sold on the Kikkerland website beginning next month and are expected to retail for under $10. Now all we need are different colored LED units and we can create our own 9-Volt light show.