Posted in Cables,Ethereal,HDMI by Nino Marchetti on December 19th, 2007 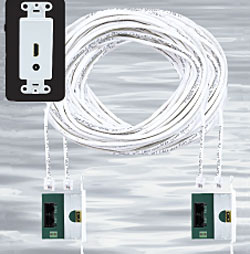 Say you have a home already wired with CAT5E or CAT6 cabling. You also have an HD-capable media server in your basement and a HDMI-enabled television in your bedroom. One possible solution to get HD content to your television from the media server might be the new Ethereal HDMI-CAT5D system, priced at around $536.

The Ethereal HDMI-CAT5D system is classified by its maker as a HDMI accessory, meaning it does not generate a HDMI signal on its own. Instead what it does is send HDMI signals correctly down two unshielded CAT5/SE or CAT6 cables by converting the HDMI cable to CAT5/6, then back into an HDMI cable at the display.