Posted in CERN,Magnets,Science by Paul Patterson on December 31st, 2006 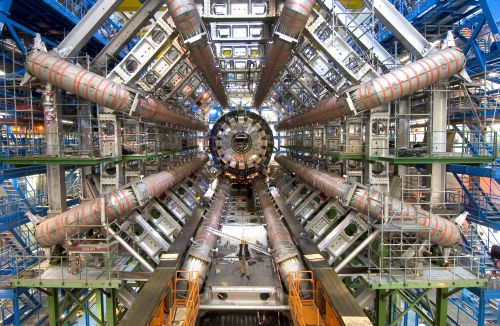 This is the ATLAS Detector, home of Barrel Toroid – the largest superconducting magnet ever built. The barrel-shaped magnet provides the magnetic field for ATLAS, a particle detector at CERN1’s Large Hadron Collider (LHC).

The Barrel Toroid consists of eight precisely aligned rectangular-shaped superconducting coils measuring 5m wide, 25m long and weighing 100 tonnes. The magnet will be used in ATLAS to bend the paths of charged particles produced in collisions at the Collider.

The goal of ATLAS is to answer questions like: why particles have mass, what is the unknown 96% of the Universe made of, and why Nature prefers matter to antimatter.

The magnet was recently powered up to its nominal operating conditions on the first attempt. Still in development by over 1800 scientists from 165 universities and laboratories, the new particle accelerator is scheduled to turn on and start taking data in …