Posted in Hard Drives by Darrin Olson on November 4th, 2013 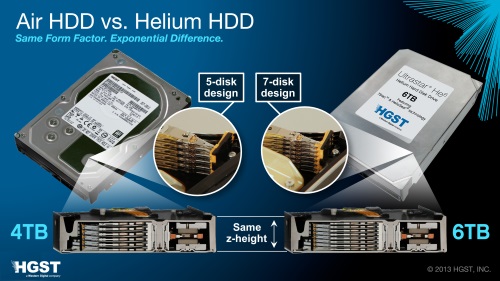 HGST, a subsidiary of Western Digital, announced on Monday the launch of its first helium-filled hard drive. The new Ultrastar He6 drive comes with a 6TB capacity in a 3.5-inch drive enclosure.

According to HGST, having helium in the enclosure has significantly less friction than air, allowing for less energy needed to physically move platters around inside the drive resulting in more platters with an acceptable performance. More platters mean more drive space with a general increase by three quarters over a standard air-filled hard drive.

The challenge has been to create a chamber in the drive that was tight enough to avoid leaking the helium, and HGST assures us that it is a safe volume with “less helium than a balloon”. Pricing was not initially available, however the company stated that it will “…cost-effectively extend the capacity and cost-per-gigabyte curve for many product generations to come.”