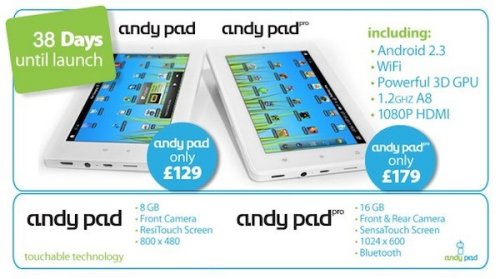 The Andy Pad Pro has been appearing all over the web, but we didn’t have much info about the “Pro” version. The Andy Pad pro and the original Andy Pad are low-cost 7″ tablets with a Resistive 860×480 screen. The newly announced Pro version has a SensaTouch screen.

The Pro’s finally been priced for £179 (about $290) . For that price you get a capacitive touchscreen, front/ rear cams, and an increased 1024 x 600 screen resolution and Bluetooth connectivity.